From hill to mill and back, the story of the Great Ridge restoration

The dramatic skyline of the Great Ridge walk connects the summits of Lose Hill and Mam Tor in Derbyshire’s Hope Valley. Separating the gritstone edges of the Dark Peak from the lighter limestone of the White Peak, the ridge walk offers near panoramic views across the Peak District.  Heavy footfall left the path in a badly eroded state and work to repair the damage to the path started in March this year, and has seen 500 metres of the most serious damage along the path repaired to protect the surrounding landscape and bordering habitat.


The repair work involved using flagstones reclaimed from a local mill, originally built from stone taken from the moors, in a rather circular tale that sees these same flagstones from the mills now nestled atop the hills. With views over to Kinder Scout, the flagstones laid along the Great Ridge will continue to pave the way for hundreds of thousands of visitors every year to enjoy sweeping views over the Peak District National Park, which this year celebrates its 70th anniversary following the Kinder Mass Trespass in 1932.

The National Parks movement came about following the Kinder Mass Trespass of 1932. Many of the campaigners in the trespass were workers in the local mills and stood upon these flagstones day in, day out. Refused access to the green spaces they could see in the distance, the workers in these mills started a campaign for the nation to be able to access these beautiful places in the country, the ‘right-to-roam’ movement. On 24th April, 1932, hundreds of men and women defied the law to walk over hills and moorland to the plateau of Kinder Scout, Derbyshire, in what would become the Peak District National Park as we know it today.

70 years since the creation of the National Park, the stones that the mill workers once stood upon to work, now form a path overlooking Kinder. Alongside several footpaths across the Peak District and South Pennines that have also made use of the flagstones, they are paving the access to the countryside that these local workers campaigned so hard to achieve. An approximate total of 550 flagstones were laid during these repair works, and each one could tell a good story from moor to mill and back to moors again.

Restoration along the Great Ridge has concentrated upon the worst affected areas of the footpath that had widened onto the habitat bordering the path. By keeping to the footpath, visitors will be able to enjoy improved conditions underfoot whilst protecting the surrounding habitat. Grass seed has been applied to fill in the gaps by Peak Park Conservation Volunteers and will take a little time to establish. 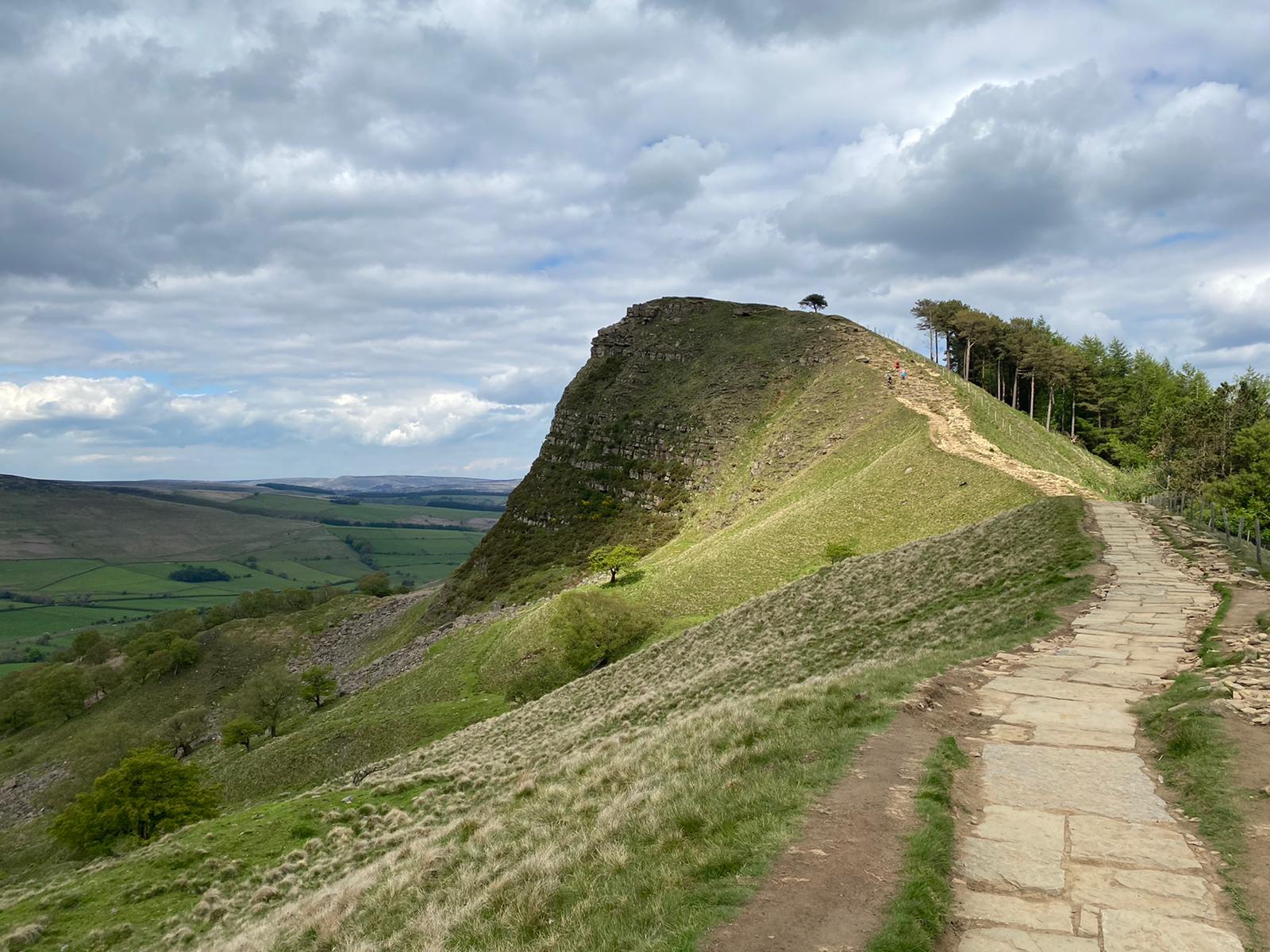 The British Mountaineering Council’s (BMC) Mend Our Mountains: Make One Million campaign kick-started the fundraising for this well-loved path, which also received funding from The Oglesby Charitable Trust, South Yorkshire and North East Derbyshire Ramblers, HF Holidays and supporters and event organisers across the National Park who supported a fundraising campaign led by the Peak District National Park Authority. The Peak District is one of only two national parks to feature two projects supported by the Mend our Mountains: Make One Million campaign. Work to restore Cut Gate bridleway, which connects the Derwent and Little Don valleys between Ladybower and Langsett reservoirs, was concluded earlier this year. On-the-ground delivery has been carried out by Moors for the Future Partnership.

The BMC would like to thank all those who made the Great Ridge footpath repair project happen – the funding organisations, the individuals who contributed to Mend our Mountains, the Access & Conservation Trust and the walkers who respected the diversion notices whilst the work was in process. The restoration project has helped protect this much-loved trail for years to come.

Attracting hundreds of thousands of visitors every year, the Great Ridge is one of the most popular upland routes in the Peak District, and perhaps even the country. The restoration work to the path will help to protect the National Park as we celebrate a year that marks 70 years of access to these incredible spaces.

It has been great to work with the BMC and other funders on this exciting project, thanks to all who have contributed, this is a footpath that can be enjoyed by many for years to come. The work is part of a wider path restoration project that will protect and preserve these landscapes and the biodiversity in these areas, delivered with multiple funders. Pathworks include the bridleway on Cut Gate and path at North America Farm, also in the Peak District. Footpath repair is in an important part of our landscape-scale programme across the Peak District and South Pennine moors, aimed at protecting precious moorland habitats that are on the doorstep of millions.

Footpath repairs stop the spread of erosion, which gives more space for birds to nest. Our work also includes protecting bare peat from erosion and planting sphagnum moss which helps keep the moors wetter and is essential for the formation of peat. Restoration of popular footpaths such as the Great Ridge help us to enjoy the beauty, while protecting the landscape and its wildlife.

Photo progress of the works