Repair works to protect wildlife and moorland habitat are set to begin on the Cutthroat track bridleway.

The Moors for the Future Partnership is delivering works for and on behalf of the owner of the popular route, on the Moscar Estate. The site sits near to Ladybower Reservoir, just off the major A57 road. 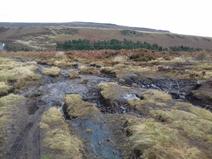 The project will get underway on Monday 29th January, to repair the most badly damaged 200m stretch of the track. It will finish by Saturday 31st March in time for the bird breeding season, so we don't disturb any birds that are nesting nearby.

The public right of way suffers from its popularity. It is arguably one of the best mountain biking routes in the country. It’s also used by walkers and horse riders.

Large stretches of the route are badly degraded and visitors inevitably try to avoid the poor surfaces. This has caused the route to widen up to 10 metres in some parts. The damage disturbs native plants that thrive in the area, as well as birds that nest on the ground.

Before the project was given the green light, an informal consultation took place with local user groups for them to give feedback on the proposals.

The aim of the project is to prevent further erosion into the moorland habitat. A new hard wearing surface will be constructed using a sub soil stone, originating locally in the ground. Effective drainage will also be put in place to control the force of water running onto the bridleway.

Due to the site's historic sensitivity, works will be undertaken with an archaeologist present at all times. It will be their job to watch each movement of soil. The Moors for the Future Partnership has worked closely with colleagues at the Peak District National Park Authority, to ensure any sensitive archaeology is safeguarded.

The bridleway will remain open to visitors, but contractors will be present undertaking the works. There will also be vehicles such as diggers and helicopters transporting heavy materials to the remote site, including stone and moorland seeds.

Keep up to date on project works.

If you’d like to find out more, please email: