Turbines, diggers and dumpers - peat restoration on a windfarm

Since 2003, Moors for the Future Partnership has worked to restore the moorlands of the Peak District and South Pennines, using a number of common actions. These include revegetation by spreading heather brash and seed mixes, blocking gullies to raise the water table, and planting sphagnum moss and other native moorland plants.

However, every moor is different and there is no ‘one size fits all’ plan. Behind the scenes, the team at Moors for the Future Partnership spends a lot of time planning conservation work. First, they survey the ground in detail to diagnose the problems and suggest solutions. Then they identify sites to work from, obtain permissions, plan where to cut and transport heather brash to and from, where to deliver lorry loads of materials to and organise helicopter days.

When senior conservation works officer Katy Thorpe first started planning conservation work on a wind farm she knew it would be different. Two years later, Katy has a renewed appreciation of helicopters and a healthy respect for wind turbines.

The wind farm on Ovenden Moor was on blanket bog in very poor condition and Katy was assigned to manage the restoration work as part of Moors for the Future Partnership’s Defra-funded Moor Carbon project. The difference? No helicopters allowed.

Normally, conservation works on blanket bog moorland rely on helicopters to deliver materials and distribute them across the site. This is by far the most practical method of moving large amounts of material around vast, inaccessible areas of boggy moor. In this case, because of the nine, 110-metre wind turbines, helicopters could not be used on the job at all. Instead, all the work would need to be done using ground-based vehicles.

When she first assessed the site, she noted that there were plenty of access tracks and thought it would be a matter of simply using these to move materials to where they were needed. However, as the planning progressed, the full scale of the challenge emerged.

Specialist equipment was needed to move materials around the site to avoid damaging the delicate peat surface, which was boggy and unstable. A variety of low-ground-pressure excavators and dumpers were needed. These machines have rubber tracks instead of wheels and are designed to spread the weight of the machines, and anything they’re carrying, as widely as possible on the bog surface. When you’re carrying tonnes of stone to make mini-dams, the weight can be quite considerable. 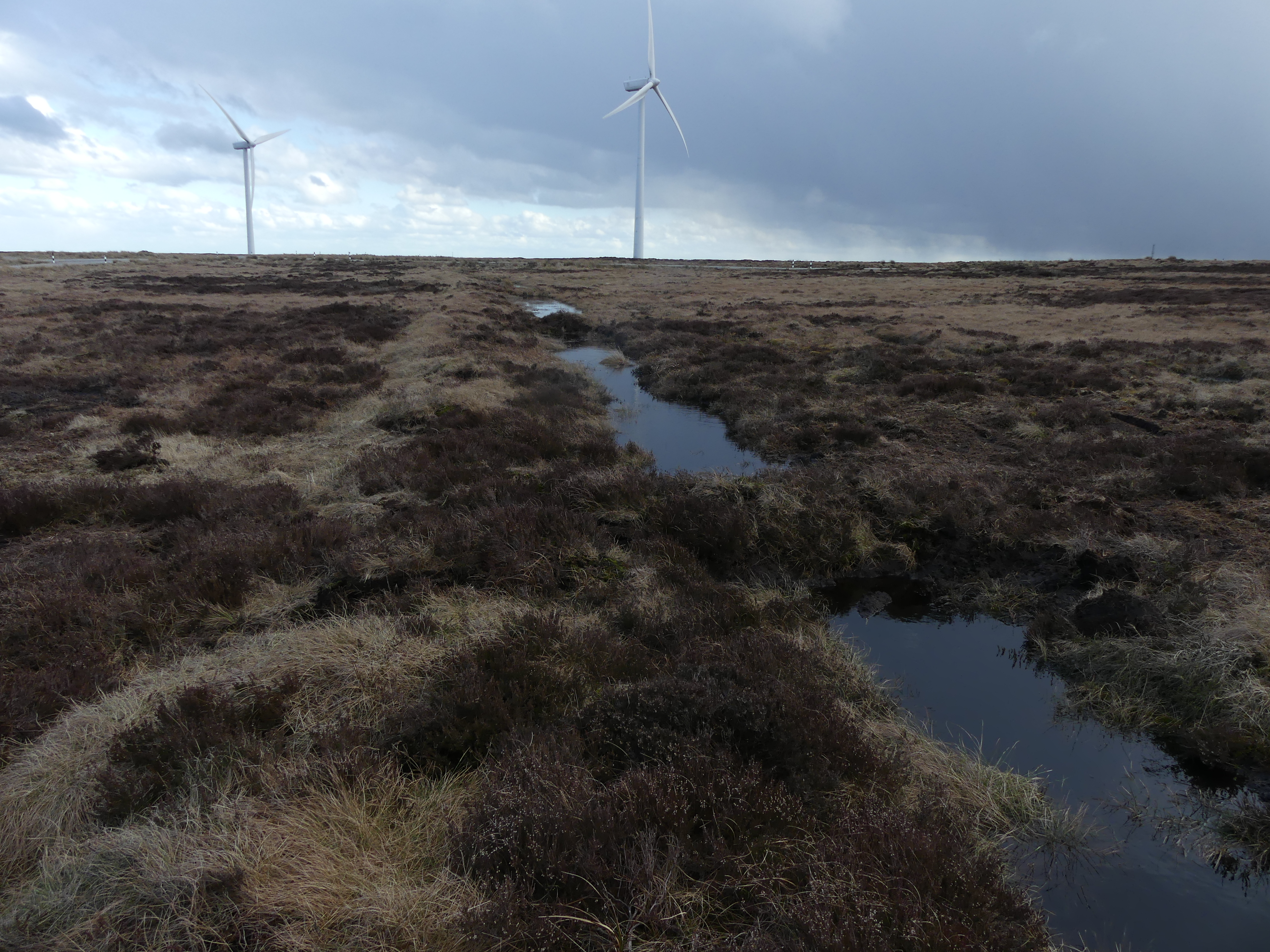 The vehicles travel slowly, so the work happened at a snail’s pace compared to the rapid activity of helicopter work.

In installing the stone dams, the gully sides were often too steep and unstable to drive a vehicle alongside, therefore the stone had to be dumped as near as possible then painstakingly moved into place by hand.

One of the main challenges was transporting chopped heather brash from where it was cut (nearby) to the areas of bare peat, to then be spread by hand. The areas of bare peat were very difficult to access and routes had to be planned very carefully around fragile wet areas. Once the tracked dumper had travelled one route once, an alternative route had to be found for the next trip to avoid damaging each area.

The weather was also an issue. Much of the work was done in January and February in freezing temperatures. If ice was stuck to the wind turbine blades, there was a risk of falling ice, so the turbines had to be avoided, adding a further layer of complication.

What Katy learned was that however complicated to organise, and expensive, helicopters may be, they are by far the best way to deliver landscape-scale conservation work on peat.

The work was completed in early March. In total, 752 dumpy bags of heather brash were spread to protect and revegetate bare peat. 99 peat dams were constructed by a digger as well as 98 stone dams. 890m of gully sides were reprofiled to allow vegetation to grow and prevent erosion. 250,000 sphagnum plugs were planted across 201 hectares. 5 hectares of fire breaks were cut in strategic positions and 2 hectares of bunds (long, low dams) were constructed to produce wet fire breaks.