The wandering wader watcher: a chat with Kevin Shepherd

If you’re a frequent visitor to the world of birds, you may have heard of Kevin Shepherd before. He’s one half of the duo that devised the ‘Brown and Shepherd’ Upland Bird Survey technique back in the 1990s as a way to find out what birds lived on the moors. Kevin has been one of the surveyors of our 2018 Breeding Bird Survey, so we had a chat with him to find out what makes him tick. 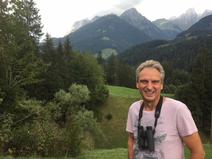 “Many years ago we realised that the uplands of Britain held internationally important bird populations, notably wading birds. But we had a major problem. There were lots of them spread over truly vast areas - so how could we possibly find out what was there and which areas were particularly important so we could protect them?”

Sampling and then using the samples to estimate the wider numbers, was initially considered, but understandably it proved difficult to get government protection for given areas without concrete proof of what was actually there. So Kevin and Dr Andy Brown set out to solve the conundrum with their cutting edge survey technique.

In order to cover vast areas, the technique had to be rapid but it also needed to be accurate. Following extensive trials, it was decided that one surveyor, should spend only 20-25 minutes within each half-kilometre square (500m x 500m), walking to within 125m of all points. The method was therefore standardised and repeatable to enable direct comparison of results across all areas.

“Fortunately wading birds are relatively conspicuous, so you can detect what is detectable. Most importantly, particularly good areas and habitats holding lots of birds can be readily identified and distinguished from relatively poor areas holding fewer birds. Furthermore surveys can be repeated over time to find out how well the birds are doing.”

The last three breeding bird surveys that have taken place across vast areas of the Peak District (in 1990, 2004, and 2018) have all used the ‘Brown and Shepherd’ technique. So it’s fitting that Kevin has been a surveyor in all three of the surveys. Luckily, he rather enjoys it!

“I simply love every single day of surveying. I love being outdoors and love being high up in the uplands. I love the peace and tranquillity as well as the challenges imposed by the terrain and weather. Dramatic changes in weather often occur, when it can suddenly turn from crystal clear to rolling storm clouds or dense fog in a matter of minutes. All in all, it is often a near-spiritual experience.”

The 2018 breeding bird survey has been looking for golden plover, curlew, merlin, twite, dunlin, short-eared owl, red grouse, and skylark, amongst others, and has taken place across 500 square kilometres of Peak District National Park moorland- around the size of 70,000 football pitches! The new review was done to find out how factors including land use and management practices, as well as different habitat types on the moors, can influence bird populations. Part of this understanding will come from analysing survey results, and comparing them to the two previous studies.

Kevin was born and bred in Norfolk and grew up living with birds in the famous marshes of North Norfolk.

“One of my earliest memories is doing a huge painting in school. When I was only six, a brand new classroom was built in our school and we were told we could draw anything we wanted to fill the blank walls. I drew enormous house sparrows, robins, blackbirds and chaffinches and labelled my painting ‘Garden Birds’, so I suppose I was an ornithologist from the very beginning.”

But Norfolk has a very different landscape to that of the Peak District. So what attracted Kevin to dedicate so much of his professional career to these wild and vast places?

“I think they’re really magical, challenging and special. They’re unlike anywhere else in the world. They have a very sad history, but I love the idea of being part of the recovery team that is helping to restore and protect them. Unfortunately, some folk see these places as wastelands because there appears to be vast areas of nothingness. But the work we’re doing is documenting and celebrating an abundance of life there.”

Kevin sees so many birds when out surveying, that it must be hard to pin down his favourites. However, certain birds can indicate something about the condition of the land, making a sighting feel extra special.

“I especially love seeing dunlins because they are particularly scarce in the English uplands. They are found on only the most pristine of blanket bog habitats so when you see one, it means you’re in a wonderfully healthy, functioning ecosystem, an ecosystem that is breathing and not dying. Hearing the curlew’s wonderful ‘bubbling’ song is also always exciting, and heartening to know such fabulous birds are still here in this place with me.”

Kevin has been surveying birds for over 40 years and has worked all over the country. He has no plans to stop doing what he loves because he knows the importance of collecting the data and evidencing the need for protection, especially for our struggling waders.

“Everyone should get out and experience hearing and seeing these wonderful waders in such incredible landscapes.   I’m undoubtedly an enhanced person because of nature and all the lessons it has taught me. It’s undeniably just great for the soul. We have no choice but to do everything we can to maintain and protect it.”

Does that mean we can count Kevin as being part of Team Bogtastic?