A university research project aims to discover how the restoration of moorland affects the release of harmful greenhouse gases.

Bangor University student, Bethany Howes, is working with Moors for the Future Partnership (MFFP) to see if different types of land management can alter how much carbon is stored by moorland ecosystems. 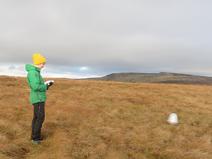 Healthy moorlands usually act as ‘carbon sinks’ because the plants growing on them take in carbon dioxide, through photosynthesis, but when the plants die, they don’t rot away as you’d expect.
Instead, because of the moorland’s waterlogged conditions, the dead plants actually become part of the soil, called peat, locking away all the carbon they took in when they were alive, for thousands of years – if not forever. However, if these habitats become damaged – through years of industrial pollution and wildfires- they can release all this carbon back into the atmosphere as greenhouses gases like carbon dioxide.

Bethany’s project will cover three previously damaged areas of the Dark Peak which have received varying levels of conservation works by MFFP, and compare these to a pristine, undamaged area. It is hoped that MFFP’s work, involving the planting of crucial sphagnum moss, will slow down the release of greenhouse gases. The thinking is, the better and more established the restoration, the less carbon will be released from the peat-soils.

To test this, Bethany will use portable chambers to collect the gasses being released from the sites over a six-month period. The study hopes to underline the importance of moorland conservation for carbon storage which could help curb the damaging effects of climate change.