Sphagnum moss soaks up the limelight on Countryfile

Did you catch us on BBC One’s Countryfile on Sunday 29th January? 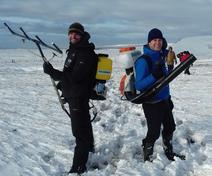 Matt Baker explained to audiences: “The hills of the South Pennines were once covered by Sphagnum moss. Over thousands of years, it’s decayed to form a deep layer of peat. But, with the top layer of Sphagnum moss gone, that peat’s been exposed to the forces of nature.

“Over the centuries, these moors have suffered terrible damage. In many areas, the plant that built these moors is missing; killed off by centuries of pollution and acid rain blown over the moors by the neighbouring industrial powerhouses.”

Brendon said: “Sphagnum has multiple benefits. In the first instance, it is the building block of the peat that forms our uplands. It also has amazing properties for water quality, natural flood risk management and biodiversity. The gaps in the moss provide a great habitat for invertebrates to thrive, which then provide food for chicks which breed and grow on the moors.

“Where there’s bare peat on the moors, we lose 2cm a year through erosion. All of that peat goes into the reservoirs and local water companies have to pay thousands of pounds to clean it before it flows through people’s taps.

“The re-vegetation has a massive impact on holding the water up on the hills; slowing the flow, reducing the erosive forces and, in experiments, we’ve found it will actually reduce the amount of peat that’s being washed off [the moors] by up to 90%.”

Matt used a watering can to demonstrate rain water falling directly onto bare peat. He commented: “It’s a very small quantity of water and producing a lot of sludge.”

Matt then poured the water onto peat covered in lush green Sphagnum moss, showcasing its water absorbing and cleaning qualities.

Matthew Barney from Micropropagation Services was also on hand to explain more about the beads, slime and hummocks we’re using to reintroduce Sphagnum on such a huge scale.

Over the next four years, we’ll be working alongside partner organisations to plant around 1.7 million plug plants and clumps of this peat-forming moss to over 1700 hectares of the Peak District National Park and South Pennines.

Our conservation work is part of our multi-million pound programme of works that we have been carrying out since 2003 to reverse more than 200 years of damage that left large areas of moorland bare of vegetation.

Our work is delivered through the Peak District National Park Authority as our lead and accountable body. We also partner with the National Trust, Natural England, United Utilities, Severn Trent Water, the Environment Agency, Yorkshire Water, Defra, the RSPB, Pennine Prospects and representatives of the moorland owner and farming community.

You can get involved in our efforts to conserve peat moorland. The Big Moss Map is a survey of Sphagnum moss in the Peak District and South Pennines.

We are looking for volunteers to walk sections of path and look out for patches of Sphagnum. We’d like you to tell us whether you saw any Sphagnum or not and if you did, some information about the patches you saw. By doing this over many years, we will be able to detect whether we are seeing any changes in how much Sphagnum there is and the types of places it is growing in. Find out more.

You can watch our Countryfile feature until Tuesday 28th February on BBC iPlayer.