Conservation numbers: It was a Personal Best for some, a Season Best for others, and maybe even a National Record for the Partnership!

The winter of 2017-2018 definitely had a bite and it took a while for spring to finally arrive.  But the Partnership’s conservation teams take nothing lying down and made sure they bit back! Across the Peak District and South Pennines: 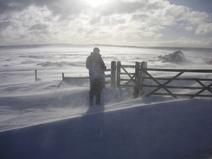 The tough winter conditions made these numbers a challenge to meet but the dedication of the partnership’s staff and volunteers shone through from the volunteers at RSPB Dove Stone to the staff at the Peak District National Trust. Beating the wintery weather and achieving these great numbers couldn’t have been done without a massive partnership effort and we want to acknowledge everyone who pulled together to make it happen including:

The team of contractors who were repairing the famous Cutthroat bridleway from February to March, and managed to get the job done even though the snow closed the roads for several days. The science team who were monitoring water table levels on Kinder and managed to collect the data, despite the cold freezing the water and forcing the team to visit the sites several times in order to collect accurate recordings. And everyone who still managed to plant over half a million sphagnum plug plants during March even though the snow blocked roads and froze the ground, making planting very hard work!

Katy Thorpe, Conservation Works Officer at Moors for the Future Partnership said: “We have a fantastic partnership and the amount of effort the National Trust and RSPB put into meeting the planting targets alongside contractors was inspirational.”