Are blanket bogs VIP enough for a House of Commons reception? Of course they are!

The sun shone and the sphagnum moss made it through security as collaborators and new companions of Moors for the Partnership came together in London to celebrate and showcase partnership work.

Severn Trent Water hosted a reception in the Members Dining Room of the House of Commons on behalf of the Partnership on Tuesday 11th September, sponsored by MP for Penistone and Stockbridge, Angela Smith. 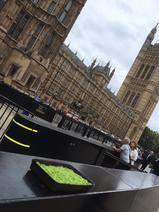 The reception set out the Partnership’s plan to build on the achievements of the past 15 years, by using the Price Review Process (PR19) to raise awareness and support for blanket bog conservation. This will allow the three water companies operating in the area- Severn Trent, United Utilities and Yorkshire Water Services- to improve water quality and build resilience into the upper catchments of the South Pennines Special Area of Conservation.

This is a big job across vast landscapes that cross many boundaries and is only possible to achieve if partners work together. The three water companies supply millions of their customers from this landscape and their previous Asset Management Plans have match funded two of the biggest conservation projects in the UK uplands- MoorLIFE and MoorLIFE2020.

Blanket bog has an important role to play in these plans. By working with the Moors for the Future partners, the three water companies will be able to improve water quality by reducing the amount of peat washed off the Peak District and South Pennine moors into the rivers and reservoirs. Protecting this huge natural resource not only supports the water companies’ customers, but also increases biodiversity, reduces flooding and stores carbon.

From bare to beautiful

The Peak District and South Pennine moors have been badly affected by the actions of humans. As the industrial revolution powered Britain across the seas and shores of the world, it was having unheard-of negative consequences at home. The smouldering smog leaving the chimneys of Manchester, Sheffield, Leeds and beyond, caught the wind and blew over the moors.

This industrial pollution landed on the delicate blanket bog moors of the Peak District and South Pennines and killed off the sphagnum moss, which is the main plant that keeps blanket bogs wet and soggy. Without the sphagnum, other bog plants too died off.

With the moors in such a bad state, with very little plant life and vegetation, bare peat washes into water sources like reservoirs, and needs to be extracted before it flows through residents’ and businesses’ taps – at the expense of water companies, and ultimately the consumers.

From Kinder to London

The House of Commons reception gave guests the opportunity to find out more about how the water companies, and the Partnership as a whole, aims to continue improving the state of the Peak District and South Pennine moors.

Keynote speeches came from Angela Smith, David Chapman, Chair of the Moors for the Future Partnership, and Malcolm Horne, Head of Environment at Severn Trent Water.

Folk singer, and the Partnership’s Bog Patron, Bella Hardy performed her stunning rendition of the 1867 poem Peak Rhapsody. Bella’s fiddle accompanied the beautiful lyrics: “Oh, where on earth is another land, so green, so fine, so fair?” As the 80 attendees found themselves momentarily being whisked away from a bustling Westminster Palace to the peaceful plains of Kinder Scout.

With Bella’s performance reminding everyone of the task ahead, the room began to buzz as everyone started making plans to safeguard the future of our moors. Guests from conservation organisations, statutory bodies, water companies, and more, alongside members of both parliamentary houses, were all doing their bit to make informal friendships flourish into meaningful partnerships.

As Malcolm Horne said: “This has been a brilliant partnership for us and looks set to continue for many years into the future.”

David Chapman said: “Healthy blanket bogs benefit everyone, and because of this, everyone has a stake in their protection. The past three water company Price Review processes since 2004 have had a very clear effect in halting and reversing blanket bog degradation, as showcased by research and monitoring undertaken by the Partnership.”

The future of the Peak District and South Pennines’ blanket bog depends on it.