Where tractors fear to tread!

Helicopters play a vital role in the conservation of moorland resources

If you are out and about in the Peak District National Park or the South Pennine area until the end of March you may see a helicopter carrying a load of white ‘dumpy’ bags flying onto the moors.

This is because one of the biggest conservation projects ever undertaken in the UK is underway on the moors of the Peak District National Park and South Pennine region and helicopters play a key role in supporting workers in one of the UK’s most inaccessible workplaces! 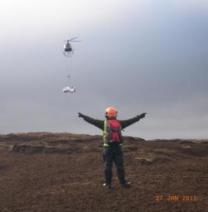 Work over the next five years by the Moors for the Future Partnership will begin the process of returning 1.6 square kilometres (the equivalent of 320 soccer pitches) of badly damaged peat moorland to a healthy condition and will protect a much larger area.

The dumpy bags contain heather cuttings (brash) and over the next few months members of the Moors for the Future team will spread 24,000 of these large bags of heather brash over 1.6 million square metres of bare and eroding peat in order to encourage the growth of a layer of vegetation to protect the peat. Find out more about the stabilisation of bare peat.

The heather has been cut within the Peak District / South Pennine area to ensure that only local plants are used and transported to 11 airlifting sites. From there it will be airlifted by helicopter onto the moor for spreading onto the land – two thirds of it will be spread by hand! 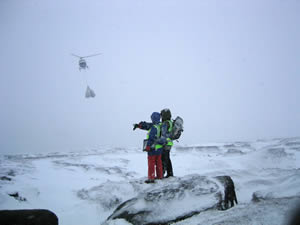 Matt Buckler, Conservation Works Manager for the Moors for the Future Partnership said:

Which Moors for the Future Partnership projects are involved in this huge restoration and conservation programme?

Who is paying for this work?

A wide partnership, led by the Peak District National Park Authority, is funding this work including Yorkshire Water, United Utilities, National Trust, Natural England, Defra and the Environment Agency but the largest single funder is the EU Life+ Programme which will be contributing £5.5 million over five years as part of the Moors for the Future Partnership’s ‘MoorLIFE’ Project.