Schoolchildren brought their prize-winning stories to life with shadow puppets, acting and animation in a competition to depict “Bringing life back to the moors.”

The national competition was organised by MoorLIFE, a five-year project to rescue some 2,000 acres of Peak District and South Pennine moorlands from the ravages of erosion, air pollution, overgrazing, drainage, climate change, and wildfires.

The winners and runners-up gathered at the Moorland Discovery Centre at Longshaw to receive their certificates and see two films created by the pupils on the themes of the winning poems, stories and pictures. The young film-makers were guided by the Babbling Vagabonds professional theatre company, based in Buxton.

Nine-year-old Sophie Wright, of Norton Free Primary School, Sheffield, took the top prize in the primary school section with her “Tragic Moorland Poem.” Sophie told the story of a picnic that turned into environmental disaster when a careless family let their barbecue blaze out of control, devastating wildlife and plants across the moorland.

“I wanted show how people can destroy the moorland and how peat bogs and moorland are easily damaged by fire,” said Sophie.

The Norton schoolchildren made shadow-puppets and voiced the story on film.

Winner in the secondary school section was Henri Poole-Birrell, of Stover School, Devon, whose cartoon of space aliens landing on moorland was brought to life with acting and animation by Henri and his fellow students. 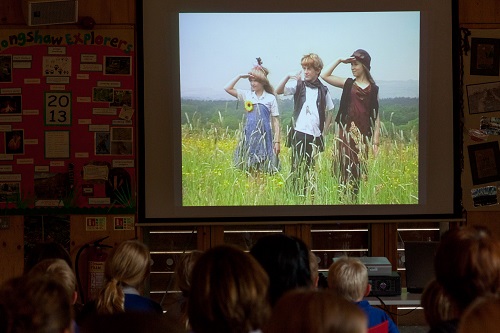 The competition raised awareness of the moorlands and the importance of conserving them for tackling climate change and flood risks, as well as the threats to its special habitats, plants, animals and birds.

The films will be available online along with the educational materials used by the schools, produced by the national park’s Learning & Discovery team.