We’re working on a ground-breaking project to spread millions of sphagnum moss capsules by helicopter in one of our most ambitious ventures to date. The project is a collaboration with Micropropagation Services and their contractor, Heli-Lift and has the potential to transform the way inaccessible peatlands are revegetated. If successful, it could benefit other peatland conservation projects across the world. 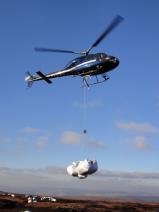 Moors for the Future has always been at the leading edge of new approaches to upland conservation. This is the latest in a series of innovations we have been involved in since 2003 and is a fitting venture to mark our 10th anniversary.

Trials of the new spreading technique will begin on moorland at Rishworth Common on the South Pennine Moors in September 2013. 2.8 million capsules of sphagnum moss will be loaded into the helicopter’s hopper and distributed across 39 acres (16 hectares) of inaccessible upland. If the trial is a success we plan to cover another 741 acres (300 hectares) in the Peak District and South Pennines where over 60 million capsules of Sphagnum moss will be spread.

Sphagnum is vital to create the wet growing conditions needed by bog-loving plants. The new technique allows the moss to be spread across large areas of moorland, eroded by 150 years of industrial pollution and wildfires. It will be a cost-effective alternative to the current method of hand spreading. 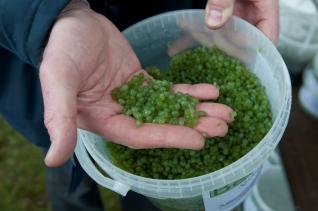 Individual sphagnum capsules propagated in a laboratory by Micropropagation Services, known as BeadaMoss ™, are crucial to the the project. Each tiny gel capsule, the size of a small fingernail, contains several small strands of moss. The gel helps to weigh down the moss as well as provide a food source and protection from the harsh climate. The  moss to grow out of the bead and begin to colonise the moors and bring the peatlands back to a healthy and sustainable condition. This pioneering technique was developed and trialed by the Sphagnum Propagation Project and funded by the Co-operative Foundation and Natural England.