On the last two days of March, Moors for the Future staff and volunteers worked against the clock alongside contractors to put the final touches to conservation works for the EU-funded MoorLIFE project which was due to finish at the end of March 2015.

The works were completed on Bleaklow in the Peak District National Park, with the application of over 50 million gel beads containing Sphagnum moss. Each bead contains between five and seven moss fragments. The team was also trialling a new application method with 900 litres of SoluMoss - Sphagnum fragments suspended in gel.

Ten contractors, thirteen staff and one volunteer made an early start on Monday 30th March to begin work with an hour’s walk over rough moorland terrain and overnight snowfall to reach the site. The bags of SoluMoss and capsules of BeadaMoss had already been dropped by helicopter in large dumpy bags each containing over 2 million beads, ready to be applied as soon as weather conditions allowed access. 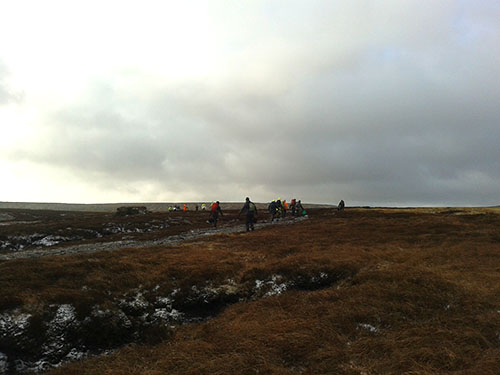 Working in teams of three or four, they collected buckets full of beads from the dumpy bags and worked outwards, applying the beads by hand. It is important to spread the Sphagnum where it has the best chance of growing – it prefers damp but not waterlogged areas, so the teams had to be prepared to walk with heavy buckets until they found a good spot. After a short break to refuel at lunchtime, everyone was back at work, determined to finish the herculean task despite the predicted atrocious weather. 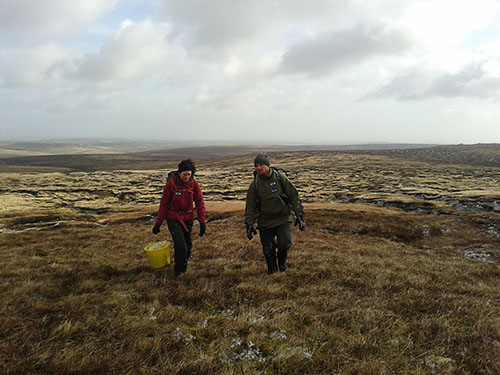 By 4pm, the sunny and breezy conditions had deteriorated and the snow started to fall as the last of 40 million beads were scatteredm and each team member walked in excess of 17 km to complete the process. A staggering achievement in just one day!

All of the empty bags were collected together, ready to be removed by helicopter at a later date. After ensuring all the bags were secure and ready for collection, there was just enough time for a team selfie before starting on another hour’s walk through wind, snow and sleet until they reached the meeting point and could make their way home. 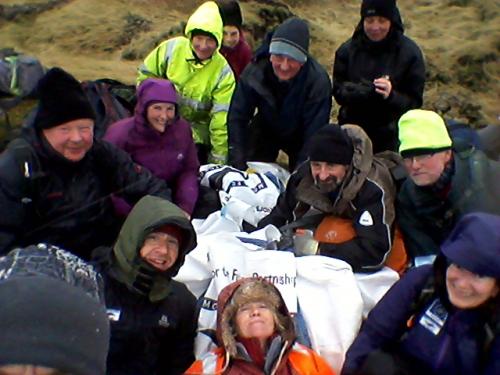 The following day contractors worked in gale force winds and heavy showers to spread the remaining 14 million beads. Work cannot continue after 31st March without consent from Natural England because of the likelihood of disturbing ground-nesting birds including the iconic red grouse, curlew and golden plover.