Groundbreaking research that goes with the flow

As part of an innovative new project to monitor the effects of gully blocking on the traverse of water across the Bleaklow plateau, we have just installed the second of 4 sets of flumes. The flumes are channels which direct the flow of water which is measured and logged to give new insights into water flow across the catchment during times of high rainfall. 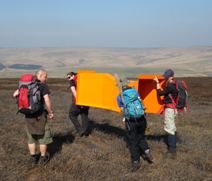 Erosion gullies cover an estimated 34% of the Bleaklow plateau and can be more than 2 metres deep. They act as channels for water to wash away, taking carbon particles with it, lowering the water table and discolouring the water that ends up in reservoirs. To help combat these problems, thousands of dams are being built on the northern slopes of Bleaklow in a 3 year gully blocking programme, part of the NECPP and the MoorLIFE Projects.

Gully blocking has been shown to reduce the loss of sediment and raise water tables immediately adjacent to the gully but not much is known about the impacts on water flow. So this groundbreaking monitoring work is vital to increasing understanding in this area.

The flumes are being set up to monitor water flow gullies at three stages of the water's journey - at the headwater (or source), further downstream, and at the plateau edge. This will give a picture of the effect of gully blocking across the wider catchment.

Three of these gully systems will be dammed in autumn 2012, with one left undammed as a reference point for future research and development of new gully-blocking techniques. 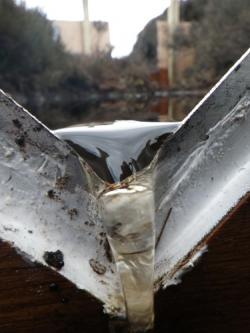 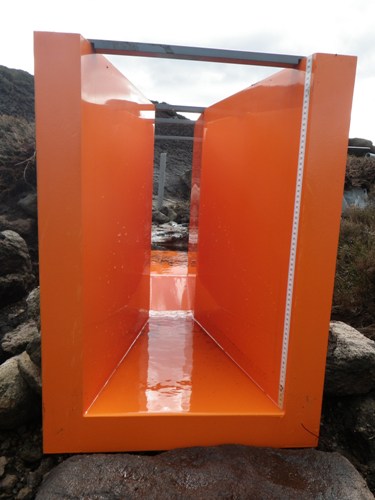 In addition to the data from the flumes, water samples are collected fortnightly and analysed for dissolved organic carbon and particulate organic carbon. We will be using rain gauges and automated dipwells to study the relationship between rainfall, water table and peak flow, and automatic samplers to study water quality during storm events.

The research is funded by the Environment Agency and United Utilities and is being carried out in collaboration with the University of Manchester’s Upland Environments Research Unit.  Preliminary results and reporting are due in March 2013.