The UK’s first real-time fire risk map has been launched by the Moors for the Future Partnership as part of a campaign to prevent wildfires destroying rare Peak District habitats.

Moorland fires cause deep, costly and long-lasting damage to the landscape, wildlife habitats, recreational areas and even drinking water – and visitors can play a key role in preventing them.

That is the message of a new “Be Fire Aware” campaign launched by the Moors for the Future Partnership, which includes the UK’s first real-time fire-risk map.

Developed by the MoorLIFE Project, the map shows the risk of wildfires on moorlands from Edale in the south to Marsden in the north and is updated every day. It takes temperature and rainfall from an on-site weather station and uses mathematical models to predict the risk of fire. The mathematical model and wildfire risk maps were developed by the University of Manchester, who advised on how to combine these two elements into an interactive map to inform visitors to the national park about the risk of wildfires.

Visitors to the Moorland Centre in Edale and the Upper Derwent visitor centre at Fairholmes can explore the wildfire risk map – which has weather information going back to 2003 when a wildfire on Bleaklow burned for a week.

But it doesn’t end there – an interactive map containing videos, photos and stories about wildfires and their prevention as well as two moorland-themed games aim to help everyone learn more about wildfires and how to prevent them. Children from Edale Primary School have road-tested the games but they can be enjoyed by children of all ages, as Derbyshire firefighters found at the launch! 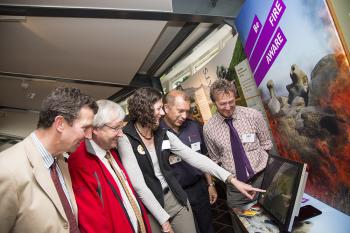 Jim Dixon, Peak District National Park Authority Chief Executive said: “We want to drive home the message that these internationally-protected moors and blanket bogs are valuable, vulnerable habitats that need protecting from fires and other environmental damage. Most wildfires are caused by human activity” he explained. “While hot dry spells increase the probability of fires, the main risk comes from people, either accidental or sometimes deliberate. We’ve found that more fires occur near footpaths and towns”.

Alan Clark, spokesperson for the Chief Fire Officers Association on Wildfires put it succinctly; “the three main causes of wildfires are men, women and children”.

Chris Dean, Moors for the Future’s Partnership Manager said: “The last big wildfire in the South Pennines took 32 days to put out and cost the fire service around £1m, all because someone used a £4.50 barbecue”.

The main risk of wildfires comes from people so no naked flames  - including cigarettes, matches, barbecues, campfires should be used anywhere near moorland.

The real-time fire-risk map can be accessed at the Moorland Centre, Edale and the Upper Derwent Visitor Centre at Fairholmes.

The Be Fire Aware games, interactive map and videos are available online