More than 20 members of the public enjoyed a free guided walk from Edale to commemorate large-scale conservation works made possible in part by European funding.

The Moors for the Future Partnership hosted the six-mile ramble on Kinder Scout on Sunday 21st May, to celebrate the 25th anniversaries of the EU LIFE and Natura 2000 programmes.

Members of the team were on hand to explain more about work to reverse 200 years of damage to the iconic Peak District National Park uplands from issues including acid rain dating back to the Industrial Revolution, and wildfire. 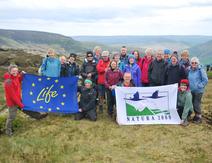 A lot of football!

Conservation work across the Peak District and South Pennines has been made possible thanks in part to backing from the LIFE programme, the European Union’s funding instrument for the environment and climate action.

The Moors for the Future Partnership’s MoorLIFE project saw almost 2,500 hectares of moorland protected between 2010 and 2015 - roughly the size of 3,500 football pitches. Funding for the multi-million pound project came from the LIFE programme as well as the Environment Agency, Natural England, United Utilities, Yorkshire Water, National Trust, and the lead partner, Peak District National Park Authority.

The Moors for the Future Partnership team, based in Edale, is now continuing efforts to protect remaining active blanket bog across the Peak District and South Pennines, with MoorLIFE 2020. The €16 million project received €12 million funding from the LIFE programme; the largest ever award to a UK nature conservation project at the time.

Jon Stewart, General Manager for the National Trust in the Peak District, said: “Funding from the National Trust and our close partners, as well as organisations including EU LIFE, Defra and the Environment Agency, has enabled us to undertake large-scale conservation works in some of the UK’s most treasured and special areas. The guided walk on the iconic Kinder Scout was an opportunity to showcase some of this work; to help celebrate the occasion and share our pride.”

Mark Haslam from the Environment Agency added: “Working closely with partner organisations, land owners and managers, we’re able to help fund and provide advice for vital conservation. This work sees vast black, degraded moorlands transformed into lush, diverse and prosperous places that bring a wealth of benefits. There is no doubt that the millions of pounds invested in this vital work has contributed a significant amount in value to people, the places we live, wildlife and climate change.”

Chris Drews attended the event. He added: “I loved the walk and had lots of opportunities to take some stunning photos. I’ve been aware of the moorland conservation work for some years, both through my recent degree in countryside management, but as a local resident, too. It's a great thing that the Moors for the Future Partnership is doing and I was thrilled to be given the chance to see some of the results so far.”

Bringing LIFE to the moors

Launched in 1992, the LIFE programme has funded some 4500 projects, with over 1000 currently underway, including MoorLIFE 2020. The budget for the LIFE programme for 2014–2020 is set at €3.4 billion in current prices. This money is being invested in species and habitat protection, and the world's largest coordinated network of protected areas, Natura 2000, contributing €43 billion in ecosystem services, including to water, wildlife and carbon storage.