Camp fire caused loss of 50 years’ worth of valuable peat in the Peak District National Park.

The resulting blaze released greenhouse gas emissions equivalent to running all the homes in a town the size of Bakewell or Hebden Bridge for a year.

A case study by Moors for the Future Partnership has calculated the carbon cost of the fire, which burned through a layer of carbon-rich peat, releasing greenhouse gasses into the atmosphere. The case study estimated that the fire released over 11,000 tonnes of carbon dioxide (CO2), equivalent to running 1,426 homes for one year.

The blaze was started by a campfire that got out of control. It took place at the Roaches in Staffordshire two years ago, in August 2018, and burned 61 hectares of precious blanket bog habitat, underpinned by a deep layer of peat. It required 12 fire appliances and a helicopter to put out.

At a time when people are enjoying the beauty and freedom of the Peak District National Park and South Pennines Park more than ever, Moors for the Future Partnership is raising awareness of the huge impact of moorland wildfires. The simple message is to never have any kind of fire in the countryside. 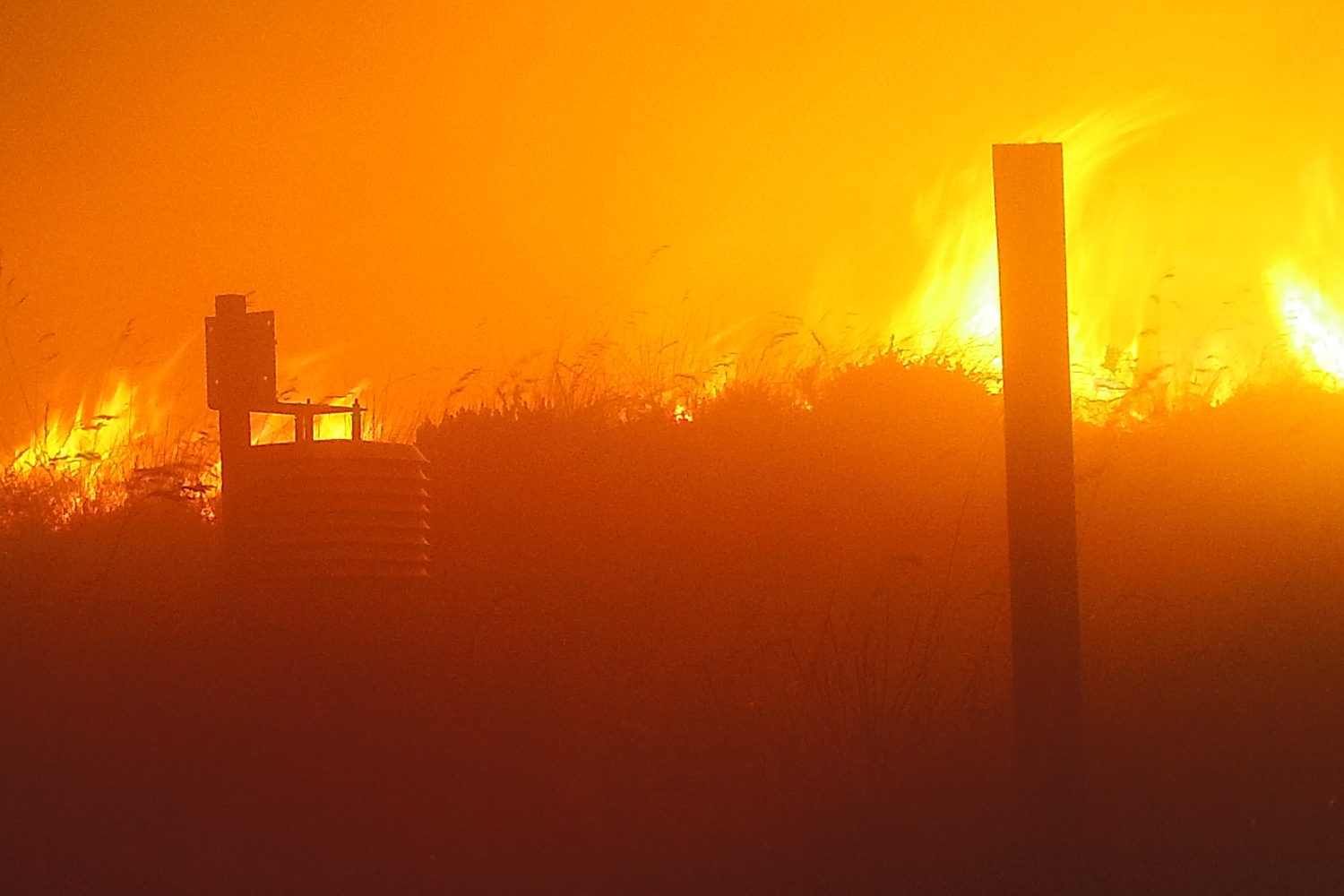 Peatlands, including the blanket bogs covering the hills of the Peak District and South Pennines, are a vast store of carbon. Carbon is stored in peat that has accumulated over millennia as a result of boggy vegetation being preserved in waterlogged, acidic conditions. When it’s dry, the peat easily catches fire. The smoke released contains huge amounts of greenhouse gasses.

The case study was only possible because scientists and volunteers from Moors for the Future Partnership were already monitoring the moor before the wildfire occurred. They had installed ‘peat anchors’ to measure the depth of the peat, so after the fire it was possible to measure the new depth of peat and work out how much had been lost. The case study, which was undertaken as part of the MoorLIFE 2020 project, found that an average of 53mm of peat was lost across the site of the fire. This means that across the area, over 5cm of peat, which took 50 years to form, literally went up in flames.

As our climate changes the likelihood of longer spells of hot, dry weather is increasing. It is becoming more and more imperative that we prevent moorland wildfires. Almost all wildfires are started by people, so raising awareness has never been more crucial. In the past two years huge fires at Ilkley Moor, Marsden Moor, Tameside (often referred to as Sadleworth), Widdop and the Roaches have placed a severe burden on fire services and local residents, and devastated wildlife and habitats. They all caused large amounts of peat to catch fire, releasing large quantities of carbon dioxide. 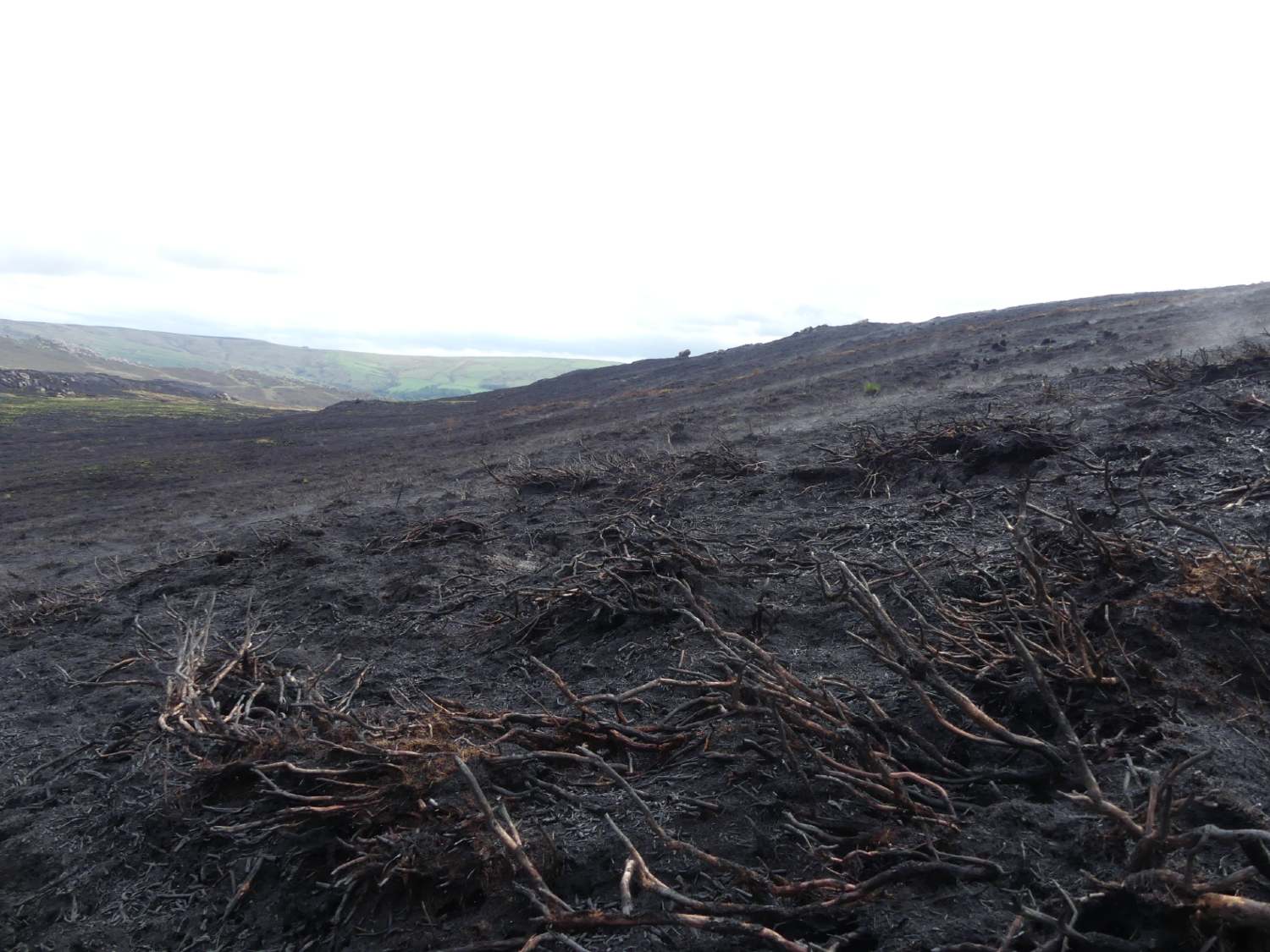 Moorland restoration activities like those carried out by Moors for the Future Partnership have the potential to reduce the impact of wildfires. Blocking erosion gullies keeps the peat wetter for longer during long periods of dry weather. Planting sphagnum moss, which holds up to 20 times its weight in water, improves the biodiversity of the bog, keeping it wetter. The scientists who studied the fire site noted that the wettest area - where mini-dams made of peat had been installed to hold water on the moor for longer - helped to protect the moorland by significantly reducing the impact of the wildfire.

A healthy blanket bog is covered in a living layer of vegetation. The plants take carbon dioxide in from the atmosphere. In the boggy conditions, they gradually turn into peat, locking the carbon away. In the Peak District and South Pennies, many of the moors are in poor condition and lack the living bog layer. It takes about 10 years to lose 11,000 tonnes of CO2 from bare peat, due to weathering and erosion. Moors for the Future Partnership’s restoration work is reversing this trend, by covering bare peat with moorland plants. When wildfire strikes, the same amount of carbon is lost in just a few days, leaving behind bare peat which is then also susceptible to erosion and weathering.

David Chapman, Member of the Peak District National Park Authority and chair of Moors for the Future Partnership said:

‘During the pandemic we have seen more people than ever visiting the Peak District National Park and South Pennines Park, where they value the open space and opportunity to relax. We welcome people to the moors and ask every visitor to take responsibility for making their visit safe. This piece of research gives us a stark reminder of how damaging a moorland wildfires can be.

‘There are a few simple asks we have of visitors: Don’t have a barbecue or open fires, only camp in designated campsites, take your rubbish home with you, respect each other by following government guidance, and park responsibly. We’re truly grateful to the vast majority of visitors for respecting these guidelines. We ask that you spread the word to help us protect the UK’s original national park and the iconic South Pennines.’

Find out more about our carbon audit and read the report