Cinderella will go to the ball, but she’ll be wearing hiking boots, not glass slippers!

Fairy-tale in Edale as rare habitat is celebrated at festival-style conference in remote Peak District village.

This September, nearly 300 international experts in peatlands came together to learn, share and celebrate the wonder of bogs at BogFest, a conference delivered with a festival atmosphere. 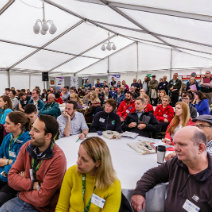 Peatlands are exceptionally important for our wellbeing, even though for many they are out of sight, out of mind. Covering four million square km worldwide, peatlands are found in almost every country. They store twice as much carbon as the entire world’s forests combined, playing a vitally important role in regulating climate change.

However, peatlands are under threat globally because they have historically been undervalued, misunderstood and misused. Indeed more than one academic characterised peatlands as having Cinderella syndrome – meaning that they are not recognised or appreciated.

But things are changing – in the words of Rob Stoneman, Chair of the IUCN UK Peatland Programme, ‘Cinderella is yet to make the ball, but her fairy godmothers have been found and she is on her way.’ These fairy godmothers are the speakers and delegates at BogFest – people who spend their time contributing to the study and conservation of peatlands, and advocate for their protection and restoration.

Across the Peak District and South Pennines, Cinderella syndrome manifests itself as huge areas of blanket bog that were denuded of life and dried out due to years of atmospheric pollution, wildfire and overgrazing. Moors for the Future Partnership, co-organiser of BogFest, works on a landscape scale in the Peak District and South Pennines to rewet and reintroduce bog-forming vegetation to upland blanket bogs, in an effort to improve carbon capture and water quality, reduce the chance of flooding in the valleys, improve habitats for wildlife and reduce the risk of wildfire. The Partnership’s work covers vast areas of iconic scenery like Kinder Scout, Bleaklow and Black Hill, experienced by thousands when walking the Pennine Way.

Holding BogFest in Edale meant that there was ample opportunity for conference delegates to witness practical peatland restoration work up close and personal and see for themselves the terrific difference it is making.

The conference focussed on many aspects of peatland restoration and research, with 46 sessions and 85 speakers covering peatland science, practical management and restoration, the future of financing vital work, government policy and how better to communicate the value of our peatlands.

Popular sessions included a workshop demonstrating the use of unmanned aerial vehicles (also known as drones) to build an accurate picture of the type and mixture of plants on blanket bogs and a Question Time style panel on Peatland Policy: Supporting Nature’s Vital Services in the Uplands.  The panel included the likes of NFU, Green Alliance and Defra on what a new agricultural subsidy system might look like and how new nature economies could be cultivated, with Brexit providing a unique opportunity to make the case for nature to the UK Government.  As part of the panel, Angela Smith MP expressed her views on why we should invest in improving the condition of upland blanket bogs:

“Improving the condition of blanket bog is an investment in our future, in a healthier environment, water that is actually cheaper to put in the taps because it’s cleaner when it comes off the hills. When Sheffield flooded in 2007, I made it clear that part of the solution was to invest in moorland restoration, and my constituents thought that was exactly the right thing to do.

New guidance was introduced to help build resilience into our uplands: Blanket Bog: Land Management Guidance, which has been produced by the Uplands Management Group (a collaborative working group of land managers and conservationists), and published by Moors for the Future Partnership. This practical guidance will help land managers to improve the condition of their bogs to benefit biodiversity, water quality and natural flood management, carbon capture, red grouse population and grazing.

Emma Howard-Boyd, Chair of the Environment Agency, joined the conference to talk about the importance of investing in upland blanket bogs because of their direct effect on human wellbeing, highlighting the essential services they provide, including natural flood-risk management and water quality. Delighted to join in the proceedings, she said of BogFest:

“I really enjoyed visiting Derbyshire and attending BogFest. There were some fascinating talks taking place and it was a great opportunity to meet people and make partnerships between Government, NGOs and businesses. Partnership is essential in environmental management, and the Moors for the Future Partnership has shown that you can make a compelling case for investment to enhance landscapes and catchments through its engagement with water companies.”

Taking place across the village of Edale in three venues, including a marquee pitched on a campsite, BogFest was a conference with a difference. As well as expert delegates from all areas of peatland interest, an estimated 150 members of the public the public was got involved and learned more about blanket bogs and the uplands, with an optimistic film High Water Common Ground about how communities can help prevent flooding through natural interventions, a talk about the use of the bog-building moss sphagnum during the world wars, a fell race that attracted 71 adult and 17 young runners and boggy doodles, an art workshop taking place in the hills.